For all the Biden apologists-journalists, watch this "bombshell" report by @ABC (not Fox) News, discussing Hunter's questionable business dealings & tumultuous personal life and its potential impact on his father's campaign.pic.twitter.com/0JBDzxTgTD

Hillary Clinton “Feels the Urge” to Run Against Trump Again

There’s still nine months to the election, but things aren’t looking great for the 2020 Democrats. In the hypothetical head-to-head polls President Trump trounces all his opponents, and the bookmaker’s odds favor his re-election.

As the New York Post reported: Nearly four years after President Trump defeated her in the 2016 election, Hillary Clinton said she has an “urge” to run again because she thinks she can win this time.

The main stream media just might be starting to dump on Joe Biden to make way for Hilary Clinton to run against Trump again.  It will happen at DNC convention.
Credits to ABC News & Dan Bongino.com & Twitter
Advertisements

The arrogance, the dismissiveness, the smug cackling, the accents.

If Donald Trump wins re-election this year, I’ll remember this brief CNN segment late one Saturday night in January as the perfect encapsulation for why it happened. pic.twitter.com/8kQ6zN9AZV

Prescription meds are perfect for those who have scaly, reptilian skin or those who seek relief from the pain of arthritis.  But really.  The side effects are horrendous.  OK, dry mouth we can live with, sunlight sensitivity-ok wear sunscreen, but when side effects include risk of hearing voices, growing a third arm in the middle of one’s back or the “usual” risk, chance of stroke, maybe it’s time to just bear the malady.

Weight loss commercials are another pet peeve of mine.  Does Marie Osman keep gaining and losing the same 50 pounds that she says she has lost on her diet plan ?  Or does she simply remove her 50 pound hair piece and call it a weight loss ?  I just want to know that if I were to lose 50 pounds, would I gain it all back and more when switching back to regular food ?  Spill the beans, Marie !

By far my fav commercials are insurance ones.  My lord, how many “mascots” does one company need to hawk its product.  I’m referring to G….(who shall remain nameless) as an example of overkill of spokespersons, alive or animated.  First it was a friendly gecko, followed by a friendly female (Flo) who morphed into playing multi-characters at the same time.  Then came the guys who looked alike , or not. The gypsy fortune teller, the half-man, half-motorcycle, that’s right, Casper the friendly ghost, etc.  If nothing else, they are all just a bunch of friendlies trying their best to snatch your money.  Hey, how about cutting back on your commercials and passing that saving on to your customers !  Uh oh.  Almost forgot friendly Dennis Quaid telling us that his ad is really just a commercial for insurance, no kidding.  Lately a new mascot/buddy has appeared, an emu and a sorta over-eager sidekick guy.  And how about the trouble-making mayhem guy.  Lately, he’s playing an anti-social cat. Unbelievable.

I know I missed a few, but fear not-more will come, friendly folks and animated what-cha-ma-call-its all designed to tell you how they are all saving you money, cuz you know you are in good hands with them.

Things are not going well in my blogosphere today.  I’ve not been able to log into WP until now and it seems I’ve only had 2 visitors to my blog all day (it’s 2:21 pm Chicago time).  Come on WP.  I’m apologizing now for all of the posts that have been sent to me that I haven’t gotten and responded to.  To all who have tried to visit my blog and failed, thank you for trying.  I’m just going to post this and call it a day.

But, it’s Friday, the weekend, so I’m wishing all of you a fantastic weekend filled with love, laughter and fun.  Remember to keep creating, whatever form that takes.  Bye !

WordPress works great, and then it doesn’t.  Here’s my story:

Up until a month ago, my WP domain was Tutoringyoudotorg.WP.com    Well WP changed my domain name to Tutoringyoudotorg.comstaging.com  without warning and without my consent.  Just what does comstaging  even mean ?  The nice lady at WP texted that it meant that some business accounts have been retro-fitted with this non-sensical domain name.  I told her I liked the old one much better and wanted to switch back.  No can do was the reply.  My only recourse was to switch my domain name to tutoringyou.blog   15 minutes ago, I pulled that switch.  I am now tutuoringyou.blog  like it or  not.

If there is an admin person lurking here, wth ?  All throughout the blogosphere I’m known without the staging.com part. And, I would like my old self back please.  As this is a business account, which I’m paying huge $$ for (and haven’t even earned $1 yet) I think you might seriously consider my request.  I don’t want to lose anyone following my blog nor lose access to their posts.

So my fingers are crossed that you will do the right thing and restore my good name to the blogosphere.

Not so much off the field.

Throughout the 2019 Women’s World Cup, Megan Rapinoe became a source of both inspiration and ire for her silent and vocal protests to the current state of America.

On the field, the USWNT midfielder pointedly kept her hands pressed to her sides and her mouth shut while the American national anthem was played before their matches. The move was interpreted as a sign of disrespect to the country and American troops, further dividing rather than bringing the country together. 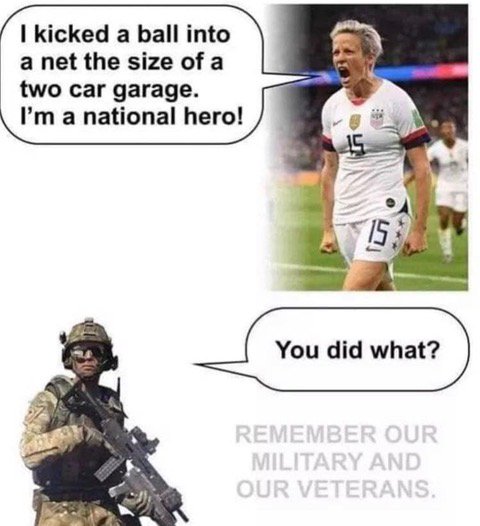 Maybe 4-8 inches of spring today.  Will winter ever give up ?

I need to rant again.  I’ve watched HBO’s series VEEP for I Think 7 seasons.  Thank God, this is its’ finale.  I have admittedly put up with much left-wing blatherings in the name of humor, because the show is a roadmap of political and moral stench that needs airing out.  And I really thought somehow it would all turn out Kumbaya at the last episode.

Here’s the spoiler, and one that has made me an ex-Veep viewer.  LIfe News describes it this way: Character on HBO’s “Veep” Can’t Wait to Kill Her Baby: “Less Talk, More Abortion”

Yes, that’s right.  For 3 episodes Amy, The VEEP’s right-hand woman, has been pregnant, the result of a one-nighter with a sex-addicted co-worker named Dan.

So, because Dan would make a lousy father, Amy makes a career decision to abort. Dan drives her to the clinic.  What happens at the clinic is very sad in that it treats a life as  just another throwaway piece of trash.  Life News quotes what happens in the examining room:  (BTW, this is all shown on tv)

“Then Amy and Dan are in the examining room with the abortionist. Amy is in such a rush to get the abortion over with that she brushes aside the option of ultrasound and barking, “Less talk, more abortion!” Dan even asks about a piece of equipment that he recognizes, obviously experienced in this situation.

Abortionist: I do need to warn you about some of the surgical risks involved.

Abortionist: Per Iowa law, I do have to offer you the option of viewing the ultrasound.

Dan: Is that the Berkeley VC-10? That’s like the Shelby Cobra GT of vag-vacs.

Abortionist: I’m sorry, who is this man?

It is as though Amy has to rush the process along before she changes her mind. At the end of the episode, Amy complains she “feels like someone shoved a red-hot pair of barbecue tongs up my joy trail” and begins to ask Dan if she made a mistake. Before she can finish she is interrupted by an incoming phone call from a campaign looking to hire her. She tells them, “You are in luck, because my schedule just got scraped clean.”

I know Amy had a right to do what she wanted with her body, it’s what got her into her predicament.  But Amy just wants to get it done and enter a new career path.  So, no tears, no what could have been, no maybe Dan would grow up and no hint of adoption in this girls career plan.

I don’t think HBO waited to run this episode during Christianity’s holiest week of Easter.  But then again, they are part of the liberal secular left.  I’ll leave that idea alone, as will I leave VEEP alone.  Goodbye Serena, Madam Vice-President.  And goodbye Dan and Amy.

I don’t usually rant on my blog, use a bit of sarcasm occasionally, but I need to tell you about this latest United pricing scam.  At first blush, Basic Economy sounds really good to us older, OK senior,  flyers.  It seems United is giving us  a pricing break.  Warning, warning !  On second thought, has United EVER given us seniors a price break ?  Hah !

Here’s my story.  I’m headed to Las Vegas for a 3 day workshop called, “The Money Show”.  I’ve attended before and have gotten some very usable advice on money matters pertaining to dividend bearing stocks.  Anyway, I book this amazing Basic Economy non-stop flight from Chicago to Las Vegas, perfect after-noon flight time and great price of $284us.  My other choice was Economy at $50 more.  So I think I’ve found a winner.  Thank you, United.  but……Hold on.  I have to choose a seat, not unusual, but have to pay $12 to reserve it.  Same for the return flight.  Otherwise, it’s like having a ticket but no seat and guess who would get kicked off an over-sold flight first.  Me !  So, not wanting to get bumped at the airport, I pay for the seat and ticket, now it’s $308 round trip.

However, I failed to completely understand United’s new carry-on policy.  There is none.  I mean Basic Economy passengers aren’t allowed to board with a full-size carry-on, just a small personal item, purse, briefcase, etc.  I’m confused at the language.  Does United mean a full size suitcase ?  I don’t understand what a full-size carry-on could be.  So, I attempt to speak with a customer service person.  I’m referred to United’s web site for baggage info.  So I log on and find out that, although the FAA allows a carry-on and a personal item, United has eliminated the carry-on item completely unless you have purchased the Economy plan or are a Premier member.  No such luck there.

The choice I have now is to stuff as much clothes, shoes, toiletries, etc. into my briefcase or pay $25 to check my carry-on (one way) and retrieve it at the luggage carousal at McCarran airport in Las Vegas.  Note:  United states that if you show up at check-in with your carry-on, it will be taken from you and put into the checked bag section.  Oh, you still pay the $25 baggage fee, but also a $25 admin fee (credit card only).  If you don’t pay, you will be bumped from the flight.  Now my super cheap flight of $284 will now cost $308 plus $50 for a round-trip baggage check, total so far $358. Sorry I forgot taxes and fees of $48 bringing the final total to $408.

How is this possible ?  I know, I shouldn’t have assumed United would be so generous, but really, $408 and that’s their version of Basic Economy.  Let’s review.  With Economy class you are allowed to bring a carry-on and personal item, and your seats are paid for with your ticket purchase. This is the way I have always traveled.  Shame on United to be so money-hungry as to think their loyal customers would stand by for this tactic.  I wonder if my seat will be on the wing some where.  Gotta pack them in and make more money !  Beware of Basic Economy.  It’s not quite the real deal that it appears.